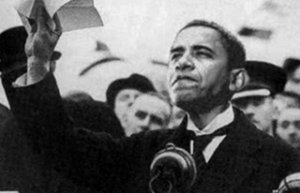 There have been some excellent editorial pieces written in the past week on the nuclear negotiations in Vienna.  As is to be expected, given that the “deal” gets worse by the day, they are uniformly pessimistic; see Melanie Phillips, for example (apologies for the paywall), along with Charles Krauthammer and Joseph Klein.

Informative articles raise troubling questions about any potential “deal,” like “The Secret Side of the Iran Nuclear Deal” (Eli Lake and Josh Rogin).  Clauses in the “deal” that will never be made public are not a reassuring feature.

That’s especially the case when Obama and Kerry are claiming that they are ready to walk away from a bad deal, while at the same time the Obama administration is preparing to put intense political pressure on Democrats – calling up a Soros-funded dark money group, in fact, as an arm-twister – to back Obama’s play.  Administrations don’t usually anticipate having to put political guns to people’s heads for good deals. END_OF_DOCUMENT_TOKEN_TO_BE_REPLACED

Shouting “Crowded theater!” in a fire.

When we left our story last time, Iran hadn’t agreed to anything except further negotiation (if she felt like it), but Western governments were depicting this as a “deal” or “agreement” with Iran, and well-meaning media pundits were proclaiming that “it” would have to be given time to work.

The question remains what “it” is supposed to be, considering that the Iranians persist in emphasizing their intention to continue uranium enrichment: the irreducible point of contention for an actual deal – a “deal” deal, if you will – to render the Iranian nuclear program less easily weaponizable.

But even if we set that question aside, the problem remains END_OF_DOCUMENT_TOKEN_TO_BE_REPLACED

It’s hard to overstate the concern with which we should view the nuclear “deal” concluded with Iran on Saturday, 23 November.  Although everyone will wait, there is actually nothing to wait for with this deal: nothing to watch develop.  To say “We’ll see what happens,” in terms of Iran’s compliance, is to misunderstand.  As regards what matters to acquiring a nuclear weapon, Iran won’t change anything she’s been doing.*  She may (or may not) put off further some things she had already suspended, or had announced she was going to delay anyway.   But her program will not actually take a step backward.  It’s not even guaranteed END_OF_DOCUMENT_TOKEN_TO_BE_REPLACED