Changes are underway in Somalia. It’s not just “pirates” now: the fight is on to regain control of the country.

The pirate port of Harardhere, on Somalia’s central coast, fell to the Islamist insurgent group Hezb al-Islam (or Hizbul Islam) this weekend. Al-Shabaab, the other major Islamist faction with which Hezb al-Islam has a growing rivalry, tried to take over Harardhere last week, reportedly after pirates based there interfered with a shipment of arms bound for its guerrilla army. But Somali news outlets indicate the elders of Harardhere preferred to be invaded by Hezb al-Islam rather than al-Shabaab. The pirates, fleeing the town, are thought to have taken out to sea more than 150 of the hostages seized from pirated ships.

The Western media’s focus on the pirates has obscured a more basic dynamic, however. The seizure of Harardhere is a move in the biggest fight for Somalia since its central government failed in 1991. The fight between insurgents and the UN-backed Transitional Federal Government (TFG) has moved northward from Mogadishu because of Western-backed TFG initiatives to consolidate a hold on central Somalia for the first time in nearly two decades. 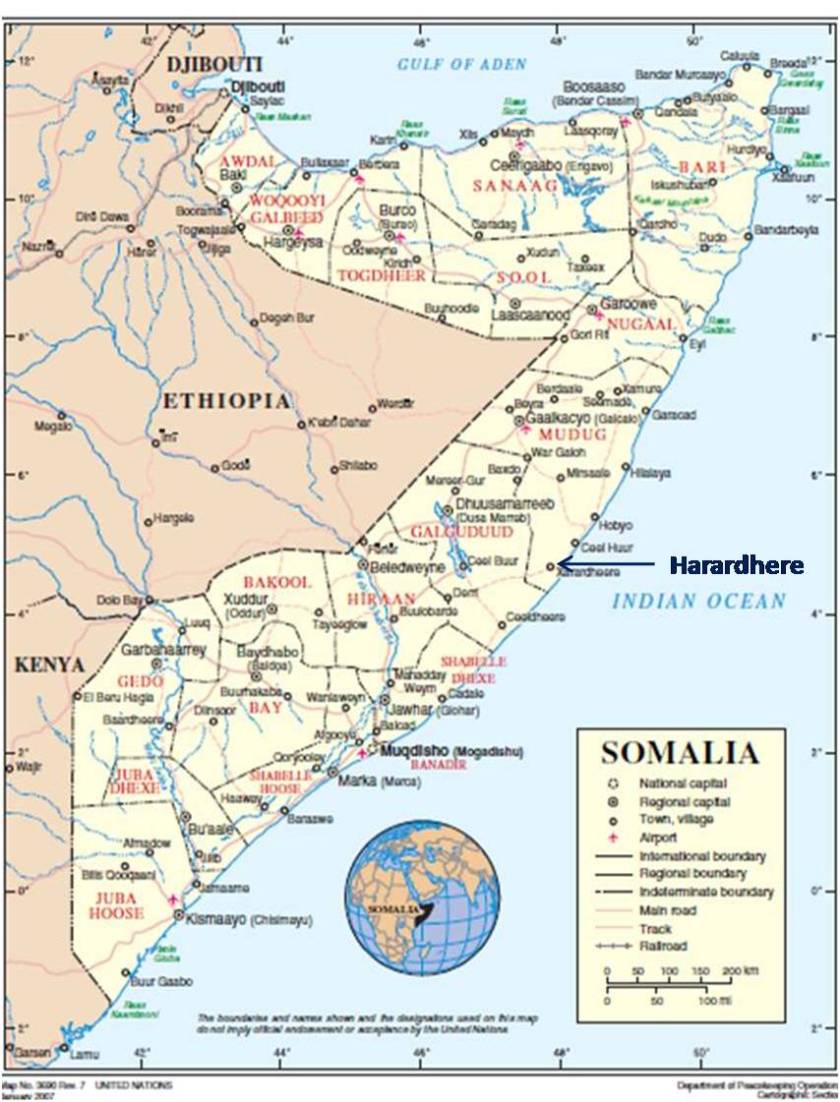 One of those initiatives was a recent TFG accord with the northern region of Puntland, which has long enjoyed a quiescent autonomy from the government in Mogadishu. On March 31 Puntland’s president signed an agreement with TFG President Sheikh Ahmed to cooperate in bringing security and order to central Somalia, with a major objective being the suppression of piracy. Two weeks later their defense ministers met to ink a more detailed agreement. The accord with Puntland, described in the Somali press as “historic,” came only weeks after the TFG negotiated a similar one with moderate Islamists in central Somalia, the Ahlu Sunna wal Jamaa.  The terms of that agreement include cooperation with troops of the TFG and the African Union mission in Somalia (AMISOM), backed by the US and EU.

This spate of activity in March and April inaugurates a major TFG push to gain control of Somalia’s northern regions. In doing so it inherently upsets the status quo in which the Islamist factions have operated. Both their territory and their relations with each other are now in question. Even their internal unity is undergoing adjustment, as this report of a Hezb al-Islam leadership dispute in the central region near Harardhere indicates. The piracy problem will be affected in this conflict, but the main issue is factional supremacy and national control of Somalia.

The TFG push bears the clear imprint of its EU and US backing, and that’s a freshly motivating factor for the Islamists. President Ahmed punctuated his busy diplomatic schedule in March with a high-profile visit to the headquarters in Djibouti from which the EU directs its antipiracy naval force off Somalia’s coast. The visit occurred on the heels of the EU decision in late February to expand the antipiracy mission to include controlling Somali ports. Shortly after that announcement, the EU also began training TFG troops in neighboring nations.

The US, through NATO auspices, provided airlift for African Union troops in March and moved surveillance drones to the Horn of Africa in April. The Obama administration went out of its way in March to downplay the US role in supporting (AMISOM), but in late April hosted an AU delegation in Washington for the first-ever round of bilateral talks – a commendable initiative but also a pointed signal.

How effective this profile of background support will be remains to be seen. Its sustainability may also be in question: the African Union asked the UN on May 1 to declare a no-fly zone over Somalia and to block the ports to prevent resupply to the Islamist insurgents. The UN decision on that will be heavily influenced by the level of commitment from the US and EU – and it could make or break the TFG’s national consolidation push.

It probably seems strange to some readers that you haven’t been hearing about this from the MSM. The dearth of public discussion, the conduct of policy under the radar: these are not reassuring auguries. A more overt posture and the declaration of a US strategic objective are key elements lacking in the current situation. The Obama administration has declared its commitment to “processes,” but as those processes provoke pushback from the insurgents who are fighting the TFG to control Somalia, it is not clear how we will respond.

Understandably, no one wants a repeat of the Mogadishu debacle of 1993. But we run the real risk in 2010 of backing ourselves into the same situation: just enough involvement to make the Horn of Africa region a prime place for al Qaeda and Iran to attack us, but not enough to shape conditions for our forces there or achieve a decisive outcome. This is the aspect the Obama policy has now, at the crucial moment when the TFG president is committing his government. Such an economy-of-effort approach has often looked like “smart power.” But Vietnam should have taught us that it is highly susceptible to mission creep, and ultimately creates disastrous vulnerabilities that could have been avoided. The clock is ticking in Somalia now.

One thought on “Somalia: It’s On”